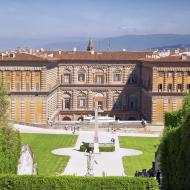 Palazzo Pitti, purchased in 1550 by Cosimo I de’ Medici and his wife Eleonora di Toledo as the new Grand Dukes’ residence, soon became the symbol of the Medici’s power over Tuscany. Royal premises of other two dynasties, that of the Hapsburg-Lorena (successors of the Medici family from 1737) and the Savoy who inhabited it as royals of Italy since 1865, Palazzo Pitti still carries the name of its first owner, Florentine banker Luca Pitti who, during the mid-15th century, wished to erect it passed the Arno River – perhaps upon design of Brunelleschi. The Palace also includes the marvellous Boboli Garden and is currently the seat of five different museums: the Tesoro dei Granduchi (Grand Dukes’ Treasure), the Galleria Palatina e gli Appartamenti (the Palatine Gallery and Apartments), the Galleria d'Arte Moderna (the Gallery of Modern Art), the Museo della Moda e del Costume (the Museum of Fashion and Customs) and the Museo delle Porcellane (the Museum of Porcelains).